The freeing power of humility

Our abilities and capacities are actually enlarged as we learn what it means to be the child of God.

Years ago there was a cartoon character named Milquetoast. He was unqualifiedly the doormat variety—representing ultimate timidity and passivity. He would go to any extreme to avoid facing difficulties.

Milquetoast types of images come to mind too often, when we think of humility. But the fact is that this behavior cannot in any way be associated with the Christian standard of humility. Jesus' humility wasn't seen in a lack of individuality or any unwillingness to stand up for what he believed in. Rather, it shone through in his steady insistence that all power, all being, belong to God. 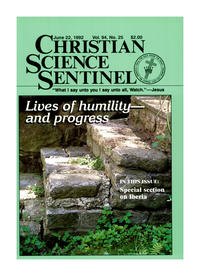