A college student, late one night, was preparing for a major exam. Books were stacked high around him. Papers were scattered everywhere. It looked as though he was doing all the things a student properly does to cram for an exam. But as the hours went on, everything came to a stop. He simply reached a very difficult point where he was so bogged down that every effort he made to go forward led to a dead end. And there were only a few hours left before morning.

Then something unusual happened. Unusual perhaps to someone who isn't used to seeking spiritual solutions. He shoved aside all the books and papers, sat back with maybe a little feeling of desperation, and began to think about God. There wasn't anything magical or complicated about how he turned to God. It was just an open heart that felt a deep desire to know God. To feel His presence. To trust Him more fully. 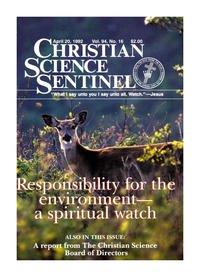