Divine Love is our sure refuge

A practical understanding of God is most needed—and available—in time of oppression.

In 1989 the International Labor Organization, a United Nations agency, published a study that estimated thirty-five million Africans were living outside their own countries. The study noted that one out of every five African migrants was a refugee, and one out of every two refugees worldwide was an African. In view of global events since that study, new figures no doubt would be higher.

The plight of people fleeing from violence, famine, and political unrest throughout the world affects us all, even if we live in areas where there is relative economic stability and political freedom. Relief agencies, governments, and private groups make often-heroic attempts to alleviate the suffering of refugees. But even these desperately needed efforts are seldom enough to care for the millions who have been driven from their homes. Is there reason, then, to think that we as individuals can contribute to the vast healing that's needed? Where can protection and a safe haven be found for us all? 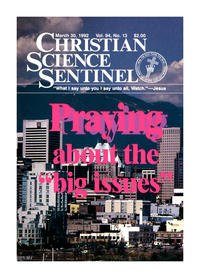