Healing—have we even begun to help the world enough?

The cries for aid that reached a crescendo during the Christmas holiday season have diminished in recent weeks. But the needs are still there. The mail arrives daily with requests for help to build homes for the homeless, to save farmland, stop animal experimentation, keep public television going, and support children growing up in poverty. And this doesn't even begin to touch on the needs for large-scale assistance—from the Soviet republics, the emerging democracies of Eastern Europe, the refugees almost everywhere.

But the cries are being heard—and answered. There is a desire to give aid as much as to receive it. And it is a desire that goes deep. One significant proof is that, despite the current economic recession in the United States, individual and family giving is on the rise. Also, as recently as 1989, it was estimated that four of every five Americans either contributed money or volunteered time to help others. The selflessness in all this is clear when we learn that those whose incomes are at or below the poverty line tend to give the largest percentage of what they earn to charity—over 5 percent. 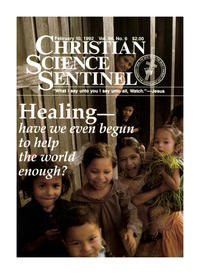