At one time I had a yearning to pray about a specific world...

At one time I had a yearning to pray about a specific world problem, but I felt inadequate. As I tried to pray about this situation, instead of finding peace I became increasingly restless and frustrated. But one morning, with a humility I had not felt before, I began to realize that this desire to pray would be answered by God! The disturbing frustration was replaced with a trustful expectation of answers from God—not only to me but to all of His creation.

Later that evening my son came to me while I was getting ready for bed and asked me to pray for him. He complained of soreness and pain in his ankle and foot, and he showed me an open sore that had resulted from his wearing a pair of roller-skate boots that day. There was swelling in his ankle and foot, as well as several other sores. 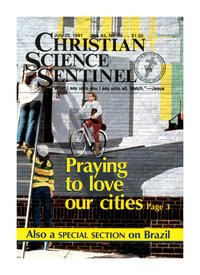