Only one decision to make

The most important decision we make is the decision to listen to God and do whatever He shows us.

I Had lain awake all night, weighing the pros and cons. Was this job the right one to take? Would I be able to do it well enough? Would it provide enough income? Would it conflict with the needs of our young family? I had to give a definite answer by ten o'clock that morning, and by daybreak, after a night of questioning and prayer, I was no nearer to what that answer should be.

Then another dawn took place ... in thought! Weighing human pros and cons was not the route to the decision. I could stop trying to peer into the future with "what if ...," "supposing ...," and "perhaps ...." All I needed to know was a simple "no" or "yes." It wasn't really a question of making a decision; it was more like watching a traffic light that was turning either red or green—all I had to do was obey whatever God would show me.

Send a comment to the editors
NEXT IN THIS ISSUE
Article
Images that change us and help us change our world ... 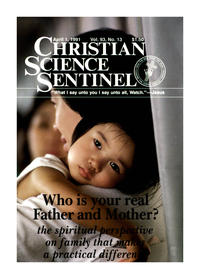