My first experience with Christian Science occurred about two...

My first experience with Christian Science occurred about two years ago when I suffered with a severe bout of flu. Two friends who were Christian Scientists told me that God loves me and does not send sickness. This seemed like common sense, and I prayed to understand God better. I was up and about the next day, feeling well; and two days later I started work again, which involved picking up heavy rocks. I was very grateful to God for this and also for the support of my friends. As a result of this healing I began a serious study of Christian Science.

Some months ago, while I was using a chainsaw, something lodged itself in my eye. My vision was blurred and I could barely open my eye. I rang a Christian Science practitioner for prayerful help, and she expressed much love for me. I was reminded of this statement in Science and Health with Key to the Scriptures by Mary Baker Eddy: "A spiritual idea has not a single element of error, and this truth removes properly whatever is offensive." I prayed with this truth and had an expectancy of healing. Gradually the fear left me, and it felt as though the object became smaller and smaller until it disappeared. By midday of the next day I was completely healed. I glimpsed the fact that nothing could invade my real, spiritual being. I am very thankful for this experience and for the help of the practitioner.

Send a comment to the editors
NEXT IN THIS ISSUE
Testimony of Healing
In the Manual of The Mother Church, Mrs. Eddy quotes these... 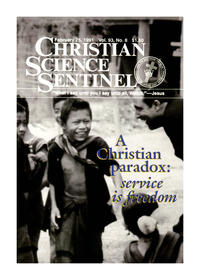