Two summers ago I received a call one day from my teenage...

Barbara B. McDonnell with contributions from James R. McDonnell

Two summers ago I received a call one day from my teenage son; he was away at a summer camp. He said that he had been having severe pains in his leg, and he asked me to pray for him. We are Christian Scientists. Because my son has had many healings as a result of prayer, he has great confidence in God's ability to preserve his health and well-being.

Knowing that my son would have a copy of the Christian Science textbook, Science and Health by Mrs. Eddy, nearby, I suggested that he read from it, as I knew that the healing truths contained in this book would be a comfort to him. I then told my son that I would call him back in a little while. 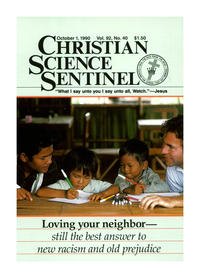