We don't have to stay swallowed up in evil. The atonement frees us by proving the allness of good.

The New Testament rings with Christ Jesus' triumph over evil. When Jesus was crucified, the import of his healing ministry and his very life appeared to have been swallowed by evil. Yet he rose again. His victory then makes possible our victory over evil's claims today.

As Christians have reverently observed, the crucifixion and resurrection involved a momentous battle between good and evil on the human scene. Christian Science explains that Jesus' victory was possible because of the great spiritual fact that God, good, is All. In the crucifixion and resurrection, Jesus broke the human conviction that evil is real and often more powerful than good. He showed that the religious affirmation of God's allness and man's unity with Him is concrete fact, vital and demonstrable in our experience. Evil, even in its most terrible forms, is not the reality it seems. The allness of good renders evil impossible. Paul speaks of the victory over ultimate evil, death itself, in these words: "So when this corruptible shall have put on incorruption, and this mortal shall have put on immortality, then shall be brought to pass the saying that is written, Death is swallowed up in victory." I Cor. 15:54.

Send a comment to the editors
NEXT IN THIS ISSUE
Article
What happened to me as [my translation of the... 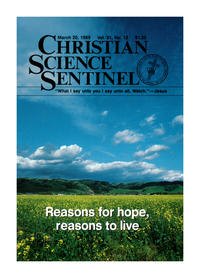