You can't be deprived of God's goodness

At times, because of our own or others' actions, we may feel we have been deprived of something that is rightfully ours. We may reason that since we have no control over the conditions or events, we will never have what we should. Christ Jesus spoke about this plight of feeling separated from good and shared spiritual, healing insights for its solution. His parable of the prodigal son illustrates that when one repents and comes to know our heavenly Father as impartial Love, he cannot be deprived—whether because of what he has done (prodigal) or because of what he feels others have done to him (elder son). See Luke 15:11–32 .

The prodigal found that his freewheeling life style quickly changed to misery, hunger, and poverty. His own actions were the cause of his suffering. Yet he didn't have to wallow in an inescapable state of wretchedness. He "came to himself." With a repentant thought and humble desire to change, accompanied by reforming ways, he started home. He was greeted by his father, who went out to him instead of waiting for him to come all the way. The father's embrace was indicative of his unchanging love for his son. The prodigal was joyously accepted into the home as what he had been all along—a beloved son. 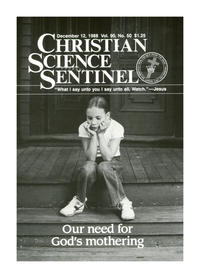