Dealing with the dinosaur problem

There is a cartoon by the American cartoonist Gary Larson that shows a convention of dinosaurs. One dinosaur is standing on his hind legs at the podium, addressing his audience of fellow dinosaurs. They are listening seriously as he spells out the scope of the problem—big climate challenges and not much dinosaur intelligence to cope.

From time to time, we may feel as though we're faced with circumstances about as difficult as the dinosaurs': the odds are against us, and we just don't think we have the capacity to cope. The solution may be to refuse to think of oneself as a dinosaur—to refuse to picture oneself in the first place as something that can be outmoded, lumbering, and lacking in capacity to surmount circumstances. 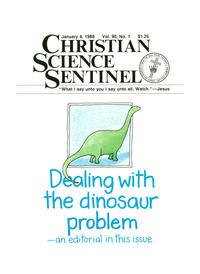