Peace at the office

My boss had made a major error but was claiming that I was the one responsible for it.

Is it possible to forgive someone who makes a terrible mistake and blames you for it? Christ Jesus proved that it is. Nothing on earth might seem harder to forgive than what a conspiracy of false accusers attempted to do to him. Yet when he was on the cross, he said, "Father, forgive them; for they know not what they do." Luke 23:34. Christian Science enables us to follow his example and not only to forgive but also through diligent prayer to reverse the consequences of such accusations.

To love where it does not seem to be deserved appears to be difficult. Yet it is a spiritual demand issued by Jesus, who said, "Love your enemies, bless them that curse you, do good to them that hate you, and pray for them which despitefully use you, and persecute you." Matt. 5:44. When this Christly demand is met, an inharmonious condition can be healed. Even after the crucifixion and resurrection, we find no record that Jesus had spiteful or unloving things to say about the liars. He did not engage in vengeful acts against those who tried to end his career. 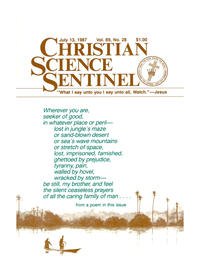