When dark times loom ahead, our first response is often fear. Yet as we walk in the light of Christ, we move forward steadily, finding God's love before us.

While piloting an aircraft over mountainous terrain during an early period of flight training, I saw what appeared to be a very threatening black cloud ahead. Turning to the expert pilot beside me, I asked with some alarm, "Are we going to go through that?" "Go right on," he said. "You will see—there's nothing there." And this proved to be true. Passing straight through the dark area, we found everything to be calm and normal.

It was later explained to me that since the sun's light was unable to penetrate through the thick cloud covering, a dark shadow appeared on the under surface of the cloud; the condition is often intensified when a second layer of clouds exists above. I had been frightened by a shadow!

Send a comment to the editors
NEXT IN THIS ISSUE
Poem
"And thine ears shall hear a word behind thee, saying, This is the way..." 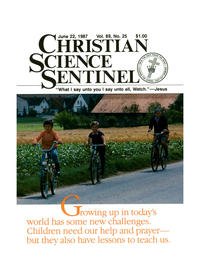