The priceless value of each individual

The history of our planet sadly shows that there has too often been an inadequate regard for the value of individual life. There have been too many times when the selfish interests of a few who had power, or of many who were seeking it, have resulted in the denigration and destruction of other individuals who could be used to further those interests or who stood in the way.

Sometimes the loss has been staggering. Writing about the evils of the African slave trade, for example, author Richard Wright estimates that of the more than fourteen million black people who were forcibly brought to the New World between the seventeenth and nineteenth centuries, perhaps four times that number had perished while crossing the Atlantic. In his book 12 Million Black Voices, Mr. Wright gives an account that seems to sum up the callous disregard for life and individual dignity that was typical of the institution of slavery. He writes, "... when we were sick, we were thrown alive into the sea and the captain, pilgrim of progress, would studiously enter into the ship's log two words that would balance all earthly accounts: 'jettisoned cargo.' " See Richard Wright, 12 Million Black Voices (New York: The Viking Press, 1941), pp. 14–15 .

Send a comment to the editors
NEXT IN THIS ISSUE
Testimony of Healing
Many years have elapsed since my first testimony appeared in... 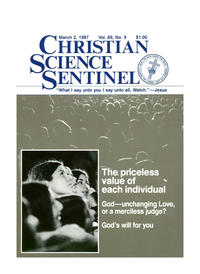