The way out of limbo

Do you ever feel that you're in limbo? Stymied by some problem, stuck in a rut, and unable to make forward progress? It's a helpless feeling, even hopeless for many, who believe that because of circumstances they can't control or their own character deficiencies, they are doomed to stagnation and unfulfilled lives.

Limbo was used as a theological term for a place where those who had not received Christian baptism were kept after death. They were not in hell—but neither were they in heaven. The term is now more likely to connote an indeterminate state between one thing and another or even a kind of oblivion.

Send a comment to the editors
NEXT IN THIS ISSUE
Article
What's wrong with this picture? 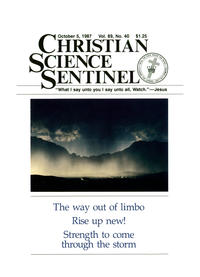