Burning the tares of criticism

One day as I was driving on a one-way ramp in a parking garage, a car suddenly came toward me and nearly hit me just before it screeched to a halt. Through his open window the driver snarled, "Slow down, blockhead!" And he then speeded away. After a stinging moment, I realized the man was so intent on finding fault with me that he was unaware that he was going the wrong way and was on a dangerous collision course.

For several days I thought about that incident and realized how many times I, like that man, had been so busy criticizing others that I had failed to see my own faults. I saw that criticism puts one on the wrong road, the road of matter—which identifies man materially. The right road is the road of Spirit—which sees man as spiritual.

Send a comment to the editors
NEXT IN THIS ISSUE
Article
Children: yours, mine, or God's? 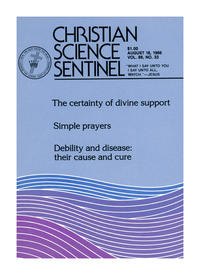