Have you ever read the Bible story about David and Goliath? It's the story of a young shepherd named David, who, with only his slingshot, went out to battle a giant warrior named Goliath. He did this when all the men in the army of Israel were afraid of this giant. And he did it by taking five smooth stones from a brook, putting one in his slingshot, and using it to conquer Goliath. I Sam. 17:4–50 .

We talked about this story in my Christian Science Sunday School class and tried to figure out if stones could stand for something. We decided that the stones were like truths that you can use to knock down lies.

Send a comment to the editors
NEXT IN THIS ISSUE
Testimony of Healing
For fifteen years I had a growth on one side of... 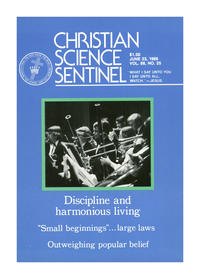