Effective on Annual Meeting day of 1985, Donald C. Bowersock will become Treasurer of The Mother Church. He succeeds Michael A. West, C.S.B., who will remain for a time as Special Assistant to the Treasurer and will then continue his work as a member of The Christian Science Board of Lectureship, not only carrying out special assignments from The Christian Science Board of Directors under Article XXXII, Section 1, of the Manual of The Mother Church by Mrs. Eddy, but also, as of January 1986, responding to calls from branch churches.

The new Treasurer, Don Bowersock, has served ably as Controller of The Christian Science Publishing Society for the past two and a half years. His previous experience includes sixteen years with Arthur D. Little, Inc., where among his duties he managed one third of the firm's consulting practice. For six years he was executive vice-president and a director of ITEK, a diversified electronics and optical company; for another six years, vice-president and manager of an internal management-consulting group within Gulf Oil Corporation; and he has been a director of several companies. A graduate of Brown University, he has also been active in several branch churches—in New Jersey, New York, California, and Massachusetts; and for the past three and a half years he has been Chairman of the Trustees at the Chestnut Hill Benevolent Association. 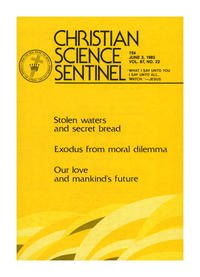