Many years ago, when our daughter was...

FLORENCE B. GOFF with contributions from HARRY GOFF, MARTA CONE

Many years ago, when our daughter was very young, the driver of her nursery school bus brought her home early one day and told us that she had complained of feeling ill. I put her to bed but the situation worsened rapidly. She had developed a high fever and refused food and drink. I prayed for her but my prayers seemed unavailing. By early evening the symptoms were more aggressive; my husband and I became quite alarmed.

We were not too deeply involved in Christian Science at that time, although we attended a branch church fairly regularly and had called on Christian Science practitioners at various times for prayerful help with our personal problems. However, we were hesitant to rely completely on God for the healing of our daughter's ills. So we called a doctor, who came to our home and made a thorough examination. He took a spinal tap and told us that he would inform us of the results as soon as he heard from the lab.

Send a comment to the editors
NEXT IN THIS ISSUE
Testimony of Healing
When questions arise regarding contagion and the care of... 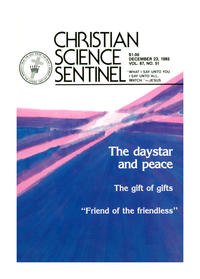