The spiritual universe—where we live

Materiality is as different from reality—the universe of Spirit—as the material and mortal account of creation in the second chapter of Genesis differs from the spiritual account in the first chapter. In the first record, God is the one Being, and man exists as His expression—as God's complete likeness, expressing His nature and knowing. Man is perceived as living in the universe of Love's provision, where there is order, beauty, peace; for God and His expression are inseparable, and God is ever governing what He has made.

However, in the second record of creation, which presents the erroneous mortal view, man is considered to be separated from God and he lacks completeness. In the original, spiritual account, the male and female coexist as manifestations of God's parenting. But in the second, material account, the separated male and female mortals are supposedly given the ability to create more mortals—though God has already declared His creation to be complete. The suggestion of divisiveness and separateness became the source of the ensuing phenomena, attributed to mortals and shown forth in envy, enmity, hatred, dishonesty, warfare, destructiveness, death. In the Christian Science textbook, Science and Health, Mrs. Eddy explains the results of unhealed, erroneous concepts of God and man. She writes, "The physical universe expresses the conscious and unconscious thoughts of mortals." Science and Health, p. 484.

Send a comment to the editors
NEXT IN THIS ISSUE
Article
You're lovely, not lonely! 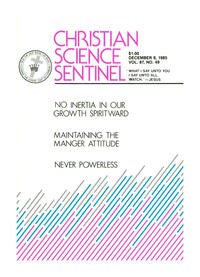