I owe much to Christian Science

I owe much to Christian Science. Before my mother and father were married, an uncle who had raised my mother and who was a physician persuaded her to go to another physician for an examination. This she did. After the examination, the physician advised my mother to have an operation. He told her that she had an ovarian tumor and that because of it, her life was in danger. However, he told her that having the operation would mean that she could never have children. Upon hearing this prognosis, my mother was very sad. She later decided not to return to the doctor and canceled the appointment for the operation. After this, she accepted the invitation of a neighbor friend to attend a branch Church of Christ, Scientist. Mother followed the teachings of Christian Science from that time forward and eventually became a member of that branch church. My parents were married, and later my sister and I were born. My mother continued her study of Christian Science, and was able to lead a normal, active life. The predicted physical condition never materialized.

How fortunate I was that my mother early enrolled my sister and me in a Christian Science Sunday School. Through the years, study of this wonderful Science has brought many blessings to me and my family; there have been numerous instances of protection, healings, and demonstrations of God's ever-present goodness. The Bible and the Christian Science textbook, Science and Health by Mrs. Eddy, have been my great help and guiding light during many years. For this I am continually grateful. 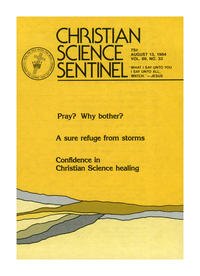