As a young woman I decided to read the New Testament straight through, from beginning to end. I had never done this before. I wanted to know what Christ Jesus' life was like from day to day; what kind of conversations he had with people; the context of his words and works. In that poor land, occupied by a foreign army, how did his teachings relate practically to people with concrete needs and problems?

As I read the gospel narratives in their entirety, I realized that when Jesus said, "The kingdom of heaven is at hand," Matt. 10:7. the divine state of being he was referring to was clearly at hand, because people were being healed of stubborn and even incurable diseases. Leprosy, palsy, blindness, deafness, crippling handicaps, were instantaneously healed. 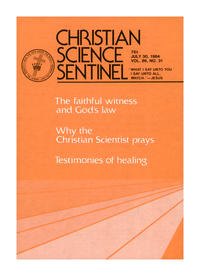