Many years ago my mother and I first learned of Christian Science ...

Many years ago my mother and I first learned of Christian Science through attending a Christian Science Sunday service. We were interested in it not necessarily for healing, but because we had been seeking the truth. In the small town where we lived, these services were conducted by one brave woman in a hotel room. From this humble beginning, eventually a Christian Science Society was formed, and later Christian Science lectures were given. The light of Truth expelled a lot of resentment toward—and mistaken notions about—Science in that community.

Through study of Christian Science I have been healed of appendicitis, depression, and many unpleasant personality traits. I am also grateful to no longer be ignorant of the Bible.

Send a comment to the editors
NEXT IN THIS ISSUE
Testimony of Healing
During the summer of 1983 my family and I went to Latin... 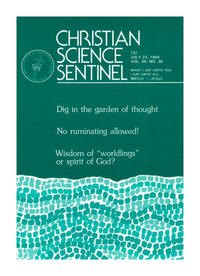