From the early years of our marriage my husband's...

From the early years of our marriage my husband's business took him over a large part of the United States. We did a great deal of moving about. At the time of which I am writing we were in the process of making the final move back to our original home, for which we were very grateful and happy.

Then, right in the midst of our moving activities, it became necessary for my husband to go earlier than planned. This meant that I had the responsibility of overseeing and carrying through with the move. We already had made a good start, and my husband took care of all that was humanly possible for him to do in a short time. Still, there was much left to be done; I felt greatly burdened and responsible. After my husband left I felt frustrated and very much alone.

Send a comment to the editors
NEXT IN THIS ISSUE
Testimony of Healing
For several years I searched for answers to my life problems... 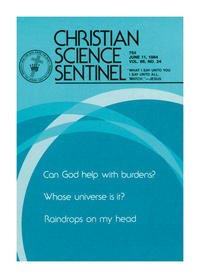