When I was about thirteen years of age I spent most of the...

Years later, after I had married, our daughter was born with a disjointed foot. Then, when she was two months old, the child developed pneumonia. As my mother had done years before when medical help had proved inadequate, I sent for a Christian Science practitioner. The practitioner prayed for our daughter, and that day the child was healed of the pneumonia as well as of the disjointed foot. The healing of her foot was so complete that later I couldn't even remember which foot had been affected. 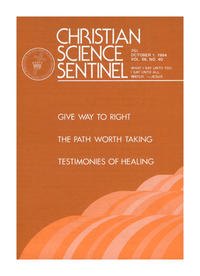