Christian Science was presented to me over twenty years ago,...

Christian Science was presented to me over twenty years ago, and its healing efficacy has been proved to me many times over.

I was a professional singer for eighteen years. One evening I went to work with what would probably be considered severe laryngitis after "losing my voice" from cheering at a football game. I was unable to find another singer to fill in for me. But instead of becoming fearful or depressed, I recognized that God was All and that I was really His expression. I rejoiced over my true perfection as God's child. A friend who is a Christian Scientist happened to be there when I arrived for work, and he began praying too! When the music started I began to sing (or squeak if you will) as best I could. Then, after singing several notes, I felt an adjustment take place in my throat, and my voice was as free as it had ever been. I continued to sing the rest of the evening. 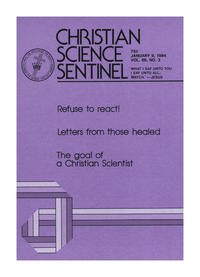