From my childhood years I had one great desire: to become a...

From my childhood years I had one great desire: to become a hairstylist. We lived in Indonesia at that time, where I knew of no opportunity to learn the trade. The only thing I could do was try to pick up as much of it as possible on my own. As I grew older I got involved in other types of work, but without finding much satisfaction. My inclination to that one particular trade just never quit.

When my family emigrated to Holland in 1954, I was determined to go to a school for hairstylists at this time. But the road to fulfilling this desire was not covered with roses. In order to enter vocational school (at that time only a night school), a person already had to be employed in that particular trade. (What would have been more to my liking than to be employed in "my" trade during training!) And as trainees, only young people from the ages of sixteen to twenty were being accepted, not a man of forty, as I was. All efforts to find a job in that particular trade were thus unsuccessful.

Send a comment to the editors
NEXT IN THIS ISSUE
Testimony of Healing
"Desire is prayer; and no loss can occur from trusting God with... 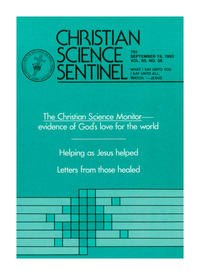