Two summers ago I went to the 1981 National Scout Jamboree

Two summers ago I went to the 1981 National Scout Jamboree. I had been to one in 1977 but just as a regular scout. This time I was older and able to serve as a junior leader. I enjoyed working with the younger guys, and they seemed to enjoy working with me. Well, I had also grown in my understanding of Christian Science in four years. So, when a small problem came up I had an opportunity to use what I'd learned.

During dinner one night, several scouts mentioned that there had been reports of food poisoning at the camp. Later many of the scouts in my troop began feeling sick and going to the medical tent. Then, after dinner, I started feeling really lousy. Finally I asked one of my assistant scoutmasters to escort me to the medical tent. (This was where the nearest camp phone was, and where I tried to contact my Christian Science chaplain. But I couldn't get through.) The medical staff placed me in the care of the Baptist minister while I waited to get in touch with my chaplain. I had brought along with me a set of books (a copy of the Bible and of Science and Health by Mrs. Eddy). I started reading Science and Health where Mrs. Eddy talks about how Christian Science healed a person of dyspepsia. She says (p. 222): "Food had less power to help or to hurt him after he had availed himself of the fact that Mind governs man, and he also had less faith in the so-called pleasures and pains of matter." 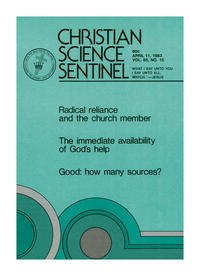