At age three I fell from a moving car and broke both arms. My father, new to the study of Christian Science and as yet uncertain of God's healing power, requested medical care. One arm was set by the doctor. The other arm he said would require surgery.

During this time my mother had the prayerful help of a Christian Science practitioner in order to keep her thought clear and uplifted. I am told that later, at the hospital, the doctor said to my parents, "By the grace of God, your daughter is healed." He had taken one last X-ray before operating and had found the bone was already knitting together. Nevertheless he held the opinion that damage had been done which would prevent me from ever having full freedom in the use of my arms. As it turned out, both arms mended perfectly, and in subsequent years I was active in all kinds of ways—including working out on the trampoline, swimming, and playing on overhead bars—without limitation. 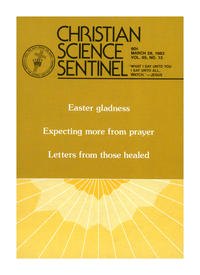