(First of two editorials discussing critical challenges mankind face in a highly technological society. The second, to appear next week, is entitled "Planned obsolescence or eternal being?")

Several months ago a magazine featured a special section on computers. The headline read, "Mankind and Machine: The Marvelous Merger." One discussion included an analysis of recent developments in the somewhat speculative area of computer science called biochip technology. It was brought out that researchers are now theorizing that biochips, molecular fabrications, eventually could be implanted in the human body and "literally grow within the brain, the central nervous system or wherever needed to restore lost or damaged function." Sky, July 1982, p. S-18 . 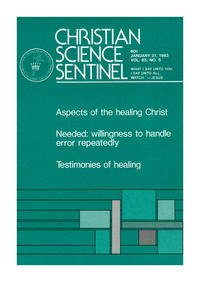