Progress: the privilege of all

He made it quite clear that any good he had accomplished or any healing he had experienced was the result of hard, consistent study and application of Christian Science, and that sometimes he had needed the loving help of a Christian Science practitioner. No special dispensation from God was involved. The erroneous belief is sometimes held that those born and raised in Christian Science are automatically better qualified and have better healings than those who come into Science in their later years. Not true! 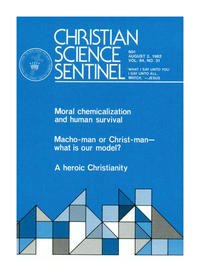