The warfare that is grand

Somebody once said, "War is hell." And now somebody else tells us war can be grand. The first one, William Tecumseh Sherman, was speaking of the war of guns and death. The other one, Mary Baker Eddy, was speaking of the war with oneself—that is, the war with one's false, material sense of self. To quote her in full: "Be of good cheer; the warfare with one's self is grand; it gives one plenty of employment, and the divine Principle worketh with you,—and obedience crowns persistent effort with everlasting victory." Miscellaneous Writings, p. 118.

When you're in the middle of this warfaring, however, it doesn't always seem so grand, but more often hellish, with little to cheer about. Why? Well, for one thing, without realizing it, we may find ourselves fighting along with instead of against devilish suggestion. 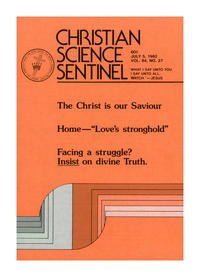