Many years ago I attended a Christian Science lecture that included a healing which impressed me greatly. The lecturer told of being called as Christian Science practitioner to a home where a young child was dying. The picture was frightening, but soon the practitioner was in control. She took the child in her arms and reached out in prayer to God for help.

The Lord's Prayer came immediately to her. Immediately she responded. Wholeheartedly she began to pray the "prayer of all prayers." 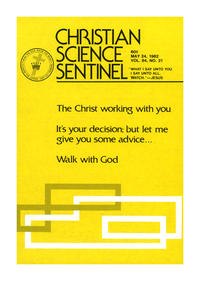