One day when we arrived at a South African game park, seven cheetahs taken into captivity shortly before were about to be fed in a special enclosure. The unarmed game warden locked himself in the compound with the cheetahs. Immediately they sprang out of the bushes and raged up to him, snarling and with teeth bared. The warden stood his ground and stared at each of them. As they came close to him, they stopped, still snarling, and then slunk backward. When they stopped snarling, he fed them.

The warden's control over these animals was demonstrated in his fearless ability to restrain them with a look and to stand his ground. While watching this performance, I thought of Mrs. Eddy's statement in the Christian Science textbook, Science and Health, "By looking a tiger fearlessly in the eye, Sir Charles Napier sent it cowering back into the jungle." Further along in the same paragraph she says: "A man's gaze, fastened fearlessly on a ferocious beast, often causes the beast to retreat in terror. This latter occurrence represents the power of Truth over error,—the might of intelligence exercised over mortal beliefs to destroy them...." Science and Health, p. 378.

Send a comment to the editors
NEXT IN THIS ISSUE
Poem
Don't give up! 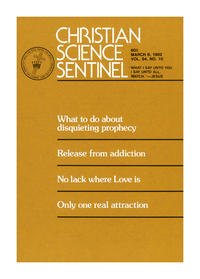