The Golden Rule and preventing lust

This editorial is not going to deal with the more obvious lustful acts that counterfeit love. Instead it is concerned with that lust—the inordinate desire for mere human knowledge—which counterfeits the natural love of learning, of teaching and communicating, of sharing ideas and discoveries.

A New Testament epistle warns, "Flee also youthful lusts: but follow righteousness, faith, charity, peace, with them that call on the Lord out of a pure heart." II Tim. 2:22. In its context this statement may refer not to physical lusts but to the inordinate desire to prove one's point, the desire that focuses on the mere letter of Christianity. This immaturity, undisciplined by the Golden Rule, may show itself in a flashy or contentious kind of information sharing. Sometimes it uses the lure of "forbidden knowledge"; usually it lacks healing content. 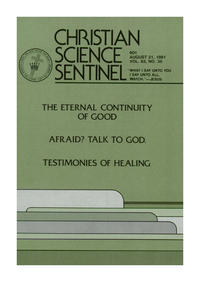