It was early spring when Cathy and her friends drove up to a Girl Scout camp that had not yet opened for the summer. During the trip the girls talked about what they were going to cook, who would sleep closest to the fireplace, and whether anyone would have the courage to go swimming in the afternoon when it would be warmest.

Twinky was driving the car, and that was special. "Twinky" was a nickname the girls had given their Scout leader. She was a lot of fun and everyone liked to be with her. Cathy knew, too, that Twinky was a Christian Scientist, though they had never talked much about it together, despite the fact that Cathy attended a Christian Science Sunday School.

Send a comment to the editors
NEXT IN THIS ISSUE
Testimony of Healing
Christian Science was introduced to me in Bombay... 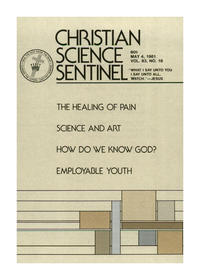