For more than half a century my life has been blessed by the...

For more than half a century my life has been blessed by the teachings of Christian Science. I first learned of Science from my wife, who is a lifelong Scientist. After attending several Christian Science services with her, I was so deeply affected by what I'd heard that I did not return to my former church.

Soon after that, faced with symptoms of tonsillitis, I decided to ask for help from a Christian Science practitioner. In less than a week I was well, and what I'd gleaned from that victory became a foundation stone on which to build.

Send a comment to the editors
NEXT IN THIS ISSUE
Testimony of Healing
Since I have practiced this marvelous religious teaching, I have... 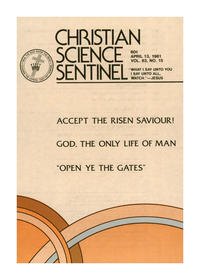