Effective January 1, 1981, Michael A. West has been appointed Treasurer of The Mother Church, succeeding Marc Engeler, who for some time has expressed his desire to return to Geneva where he will devote his full time to the practice and teaching of Christian Science. Effective December 1, 1980, Zadie Hatfield has been appointed Publisher's Agent, succeeding Frances C. Carlson, who retired at the end of November. In addition, we have asked both Mr. West and Miss Hatfield to continue in their present positions as Trustees of The Christian Science Publishing Society. There will be no change in the assigned duties and responsibilities of the Board of Trustees, the Treasurer, or the Publisher's Agent.

The third Trustee of the Publishing Society, Frederic C. Owen, will assume the Chairmanship of the Board of Trustees on January 1, 1981. The three Trustees—Miss Hatfield, Mr. West, and Mr. Owen—will continue to function as a Board on a regular basis and conduct the affairs of the Publishing Society as outlined in the Manual of The Mother Church and the Deed of Trust by our Leader, Mary Baker Eddy. 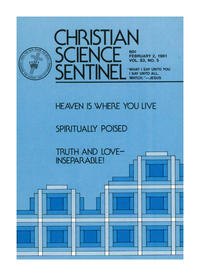