Some months ago, while I was attending the theater in London...

Some months ago, while I was attending the theater in London, a misstep sent me falling down a steep flight of stairs. Several concerned people came to my aid, but I assured them I was all right. I returned to my seat and enjoyed the performance. Later, upon returning to my flat, I realized that I'd injured my left wrist and hand. The pain was intense, so much so that I found it impossible to sleep. About 3 a.m. it occurred to me to ponder several hymns with words by Mrs. Eddy in the Christian Science Hymnal. Obeying the angel thought, I did as instructed. The pain soon abated, and when I next opened my eyes, it was morning.

By now the pain was gone, but the wrist was stiff and the hand and fingers swollen. I was about to return to the States, but I didn't relish the prospect of making a five-day transatlantic crossing with an unusable hand. Then, too, what with the scarcity of porters, one usually had to manage his own luggage. This loomed as a somewhat large predicament. Although I'd prayed for myself, the problem still persisted.

Send a comment to the editors
NEXT IN THIS ISSUE
Testimony of Healing
Despite being brought up in a family in which religion was seldom... 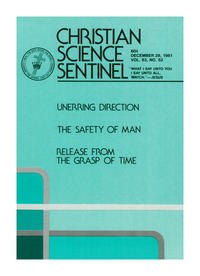