"Let the redeemed of the Lord say so" (Ps. 107:2). These words from Psalms have often prompted me to speak at Wednesday testimony meetings in branch Churches of Christ, Scientist. Four generations of my family, through radical reliance on God in Christian Science, have received countless blessings. This testimony is submitted with special love and gratitude for the steadfast support of the Christian Science practitioner whose prayer helped bring about the following healing.

About two years ago I woke one morning with some stiffness in the knuckles of my hand. I believed that I had in some way strained the hand and that the soreness would simply disappear in a short time. But when the stiffness became apparent in the other hand and in my knees, I realized that I had been remiss in challenging the first suggestion of inharmony through Christianly scientific prayer. I realized then that any evidence of inharmony was fundamentally a suggestion of life and sensation in matter. This suggestion, I knew, could be effectively annihilated through the understanding that Life is God, Spirit, not matter. I prayed a prayer of deep and sincere affirmation, acknowledging that every aspect of true body is, in reality, spiritual—harmonious and painless, expressing the freedom and vitality of Soul. I was truly able to see the falsity of what appeared to be a material condition, and felt free and fearless. Nevertheless, the condition seemed to get worse.

Send a comment to the editors
NEXT IN THIS ISSUE
Testimony of Healing
My family and I have turned to God in every need and have... 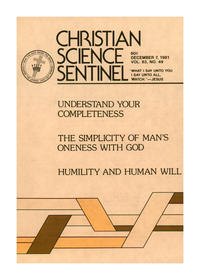