At the age of ten, one of my granddaughters was outdoors playing...

At the age of ten, one of my granddaughters was outdoors playing with some children when she was struck in the eye with a rock flung from a slingshot. A neighbor rushed her to the emergency ward of a hospital, where the child refused any medication with the explanation that she was a Christian Scientist. Her mother was called from her job, and she, in turn, phoned me to ask if I would meet her at the hospital. When we arrived, the youngster was in bed with both eyes bandaged, but she was very calm and quiet. The doctor in charge of the ward said that he had sent for an ophthalmologist because of the seriousness of the injury. He expressed concern that no medication was being administered to the child, but her mother assured him that the youngster would be all right.

While I waited for the specialist to arrive, I asked my granddaughter if she was remembering to pray over "the scientific statement of being," which she heard read at the close of Sunday School every week. It ends with these sentences (Science and Health by Mrs. Eddy, p. 468): "Spirit is God, and man is His image and likeness. Therefore man is not material; he is spiritual." The child replied that she was knowing these truths about herself, and that she was feeling no resentment toward the boy who had thrown the rock. We agreed that this was important to her healing.

Send a comment to the editors
NEXT IN THIS ISSUE
Testimony of Healing
One of my earliest healings in Christian Science was of facial... 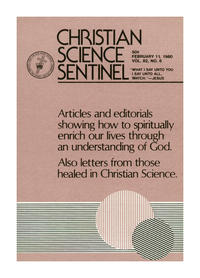