A story from India about rescue in the Himalayas

It was the end of June, two days before little Mala and her family were to leave the Himalayan resort where they had spent the last month. At first there had been lots of snow, and Mala had wanted to play in it by herself. It had disappeared under the scorching June sun, though, and now one had to climb to the foot of a distant peak to find any. But early in their stay Mala's mother had promised to take her to the snow on a picnic, so she hired two horses to ride to the high country where there was still enough snow for Mala to play in.

Now, all set for the journey, Mala dashed outside with her picnic basket full of cookies and a small toy bucket she would use to collect ice for her dad and brothers. She was thrilled to see two horses waiting on the lawn and beside them the owners, who were also going to act as guides. The bigger of the horses was the handsomer one—grayish-black, with a star on his forehead and a long shining tail.

Send a comment to the editors
NEXT IN THIS ISSUE
Testimony of Healing
Christian Science has been my only physician for... 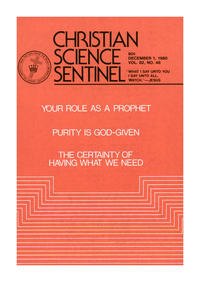