In 1965, before I became a student of Christian Science, I was told by a dentist that I had pyorrhea and would lose my teeth by the time I was forty. He told me that pyorrhea is incurable and gave me a drug to take that he said would at least forestall the disease. My mother and grandmother had both lost their teeth because of this disease, and now I seemed to be following the same pattern.

The following year I found Christian Science. After reading Science and Health with Key to the Scriptures by Mary Baker Eddy for a short time, I was healed of dependence on medicine. Along with my study of the Bible and Science and Health, I prayed, affirming with conviction that my true nature is wholly spiritual. Acknowledging this helped me realize that no beliefs about bones or gums, nor assumed laws of heredity, incurability, age, deterioration, or disease, could have any bearing whatsoever on my established spiritual perfection. I knew that God's law of perfection was all that had ever really governed me. Many times throughout the span of the fourteen years I have been studying this Science, I have had to pray diligently to overcome fear of losing my teeth. (An earlier testimony of mine relating healings our family had of other dental difficulties appeared in a 1974 issue of the Sentinel.)

Send a comment to the editors
NEXT IN THIS ISSUE
Testimony of Healing
Preparing school assignments and taking examinations present... 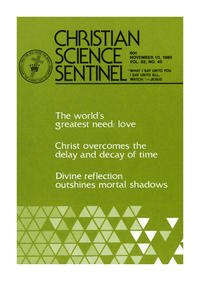