An aura is no match for divine Love

Recently, when someone from an African country asked me if Christian Science could heal a tear in an aura, I felt certain that it could. I had no idea how an aura could get torn, or even exactly what an aura was. But I know that Christian Science heals, so I felt safe in reassuring him.

The young man then explained that he had been taught—and believed—that everyone has an aura around him. It's his protection from evil, a kind of mental armor, he said. I gathered that it differed from the psychic auras said to describe a person's mental and physical state. The young man's aura seemed rather perishable, because he said some evil force frequently comes along and tears it. One whose aura had been torn would be defenseless against evil spirits, who could enter at will. Worst of all, he knew of no way to mend a torn aura. 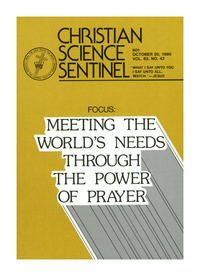