The Christ frees from the past and brightens the future

GRACE A. DUNBAR with contributions from HARRIETT D. ZIMMERMAN

For a number of years I have received proofs of God's constant love and care. When our first grandson was three, he was hospitalized with what was diagnosed as spinal meningitis. After approximately ten days, doctors informed the parents that the child might die. The boy's father, who was not a Christian Scientist, decided to have Christian Science treatment for their son. He dismissed the doctors from the case and signed all papers necessary to release the staff and hospital from any responsibility for the youngster. A Christian Science practitioner was called, and treatment through prayer was begun immediately.

State law required that the child remain in the hospital several more days to complete a quarantine period. No medication was administered during this time. Within twenty-four hours the fever had completely disappeared, and at the end of the quarantine our grandson was allowed to come home. Two or three days before his departure from the hospital, one leg was crippled. Two days after his release, he walked and ran perfectly. Our grandson is now a student in high school, and he participates in many sports. The healing has been permanent. 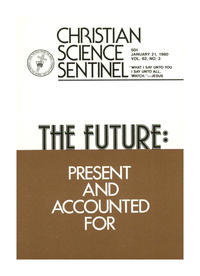