The Vienna summit and the power of God

The recent summit meeting between the United States and Soviet leaders involved much more than the signing of SALT II (the second strategic arms limitation agreement). Talks at the summit ranged over the whole spectrum of U.S.-Soviet relations—and differences—including areas of the world, such as Africa and the Middle East, where the superpowers' interests conflict.

The very day SALT II was being signed in Vienna, Christian Scientists throughout the world were beginning their week-long study of the Bible Lesson In the Christian Science Quarterly; entitled "Is the Universe, Including Man, Evolved by Atomic Force?" They were thus uniting in prayer for the protection of the world from nuclear accidents or a nuclear war. 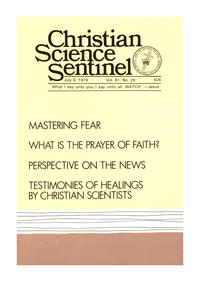