Four years ago, when I was facing seriously strained relations...

Four years ago, when I was facing seriously strained relations with my family, I was given an invitation to a Christian Science lecture. At the time, restoration of poor relations to normalcy seemed impossible, and I felt depressed, lonely, and useless. I was told by a student that Christian Science solves problems, heals diseases, and reveals the real nature of man as God's idea, His reflection. This impressed me and drew me to the lecture.

I attended, doubting I could comprehend it. But it was so beautifully given I followed it clearly. The lecturer's explanation of the healing power of Christ, Truth, and the illumination he shed on the Lord's Prayer, displaced the darkness in my consciousness with a great influx of spiritual light. The burdensome relationship problem began to fade away. Within two days I was healed of the smoking habit I had had for three decades. 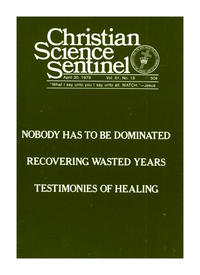