A little maid who loved much

Long ago, in Bible times, after a war between nations, the winning army would take some of the people they had conquered home with them as slaves. This happened to a little girl of Israel when the Syrians made war on her country. The Bible tells us about this in II Kings, Chapter 5.

There she is referred to as "a little maid" who was taken as a slave into the home of Naaman, captain of the Syrian army, to wait upon his wife. This captain had a disease called leprosy. But he was a good man, and the little maid wanted to help him.

Send a comment to the editors
NEXT IN THIS ISSUE
Testimony of Healing
How can I help but be humbly grateful, having been so... 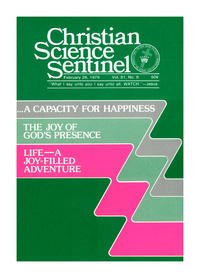