Widely publicized efforts in diplomatic circles to improve relations between world powers may nudge some people to recognize that they, also, might work to the same purpose in their own individual lives. To say the least, it is inconvenient not to be on speaking terms with a relative or neighbor for decades—or even days. Yet there are many who have this situation to cope with.

In some cases the problem has its roots in a long-past disagreement—even a forgotten feud between parents or grandparents. Shakespeare dramatized such a situation in his play Romeo and Juliet, making the two famous young lovers martyrs to the senseless hostility of their families, the Capulet's and the Montagues—who perpetuated an ancient quarrel, scarcely recalling what triggered it. 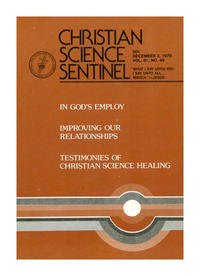