I am a pupil in a Christian Science Sunday School

I am a pupil in a Christian Science Sunday School. I am fourteen years of age and study the violin and sometimes play with the pianist in the Sunday School. Last summer I was involved in an accident while riding my minibike. I had been told not to ride it, as the steering was impaired, and a few other things were wrong with it. The thought of how much fun it would be to ride it, and take my friend on it, caused me to forget what I had been told. So I got my friend, and off we went. The steering scared me, and I turned into my brother's driveway to stop, and a camper was there. The brakes on the bike failed. I stuck my hand on the muffler to try to stop, and caught my little finger in the chain and cut it nearly off, plus mashing most of the bones.

My brother took me to the hospital, and the hospital staff called my uncle, whom I live with, and he came down; but he did not tell my aunt, who is the Christian Scientist in the family. I prayed some of the things I had been taught in the Christian Science Sunday School, but not too much, as I was overcome with it all. Finally my uncle called my aunt and told her that the doctor said he could not save my finger, and he might as well finish taking it off. The crushed bones were the trouble. My aunt said, "No. Positively no, absolutely not! Tell the doctor to replace the finger and sew it on." The doctor did. He sent me home with a big, long list of things to do about blood poisoning and pain. He said that there wouldn't be any circulation in the finger.

Send a comment to the editors
NEXT IN THIS ISSUE
Testimony of Healing
"But I don't need gloves! I don't catch ivy poisoning!" 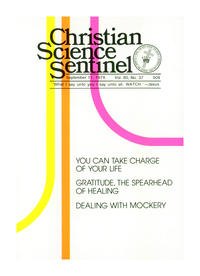